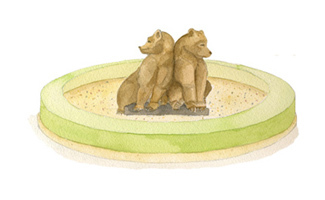 Our relationship with Thomas Rivers Brown and his winemaking began at a blind tasting years ago when estate owner Jane Chapin (Roy’s mother) proclaimed, “I don’t know whose wine this is, but this is the one. It goes down like velvet.” Vintage after vintage, we’ve been downright delighted with his wines, and we are not alone. Brown is considered one of the best Cabernet Sauvignon winemakers in Napa. “He has proven a master at taming Cabernet's aggressive tendencies and giving the wines a Burgundian mystique,” according to Wine Spectator, and he’s been named “Winemaker of the Year” by Food & Wine.

Founder of several wine labels including Rivers-Marie on the Sonoma coast and sought-after as a consulting winemaker, Brown has guided the winemaking and vineyard development at 4 Winds since our beginning.

Most importantly, as we embark on a new era of estate-grown vintages at 4 Winds, Brown continues to implement his philosophy of keeping the winemaking process as simple as possible. As he says, “Letting the characteristics and beauty of the fruit shine through is what’s most important.”